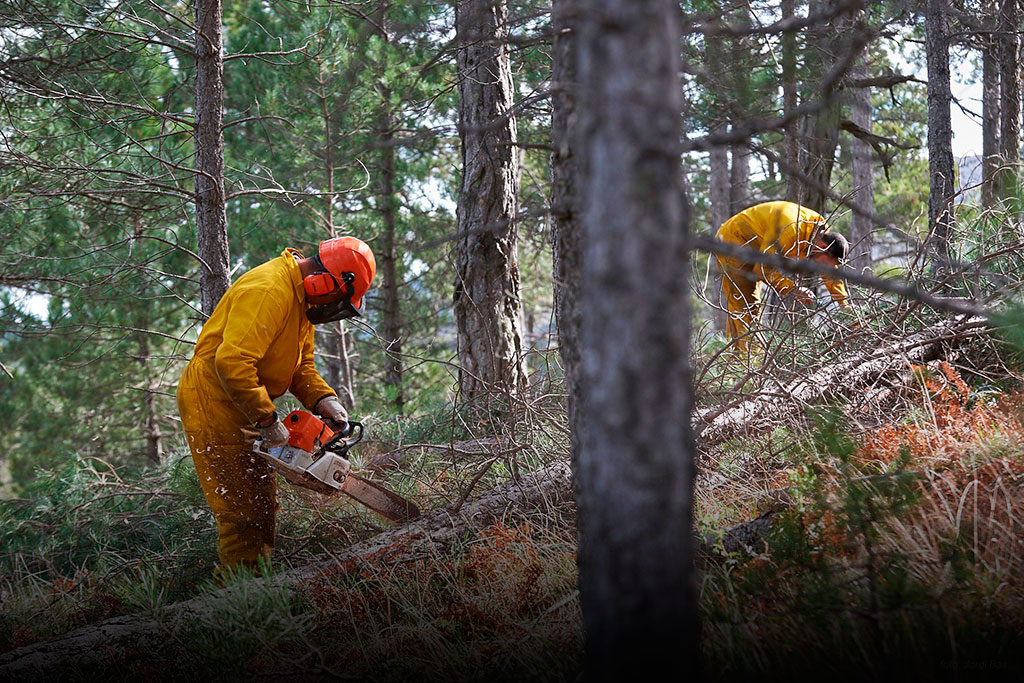 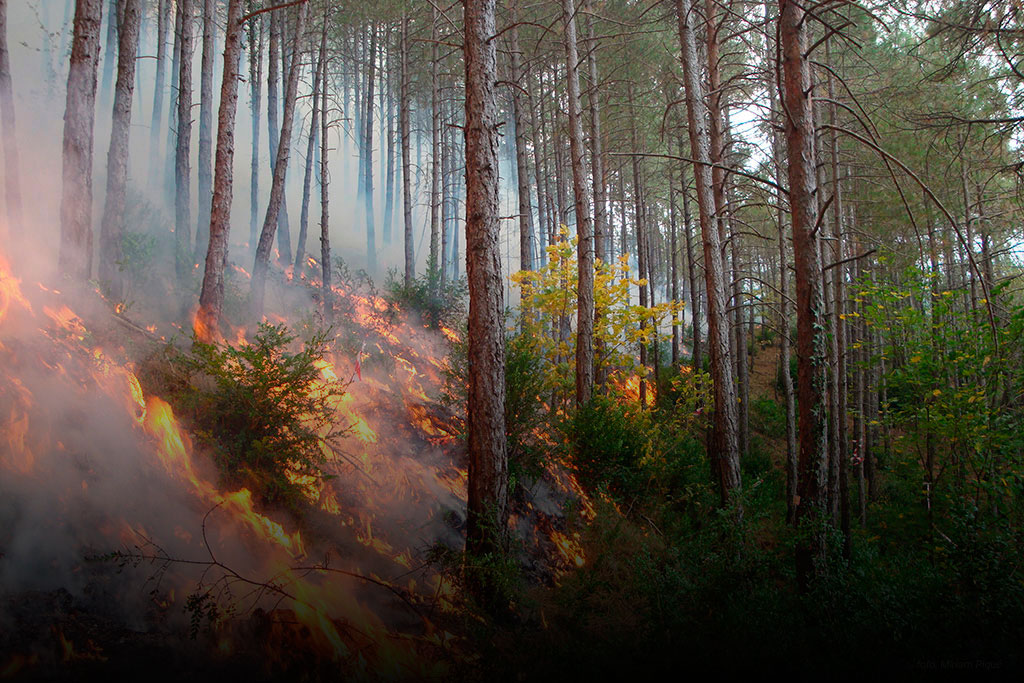 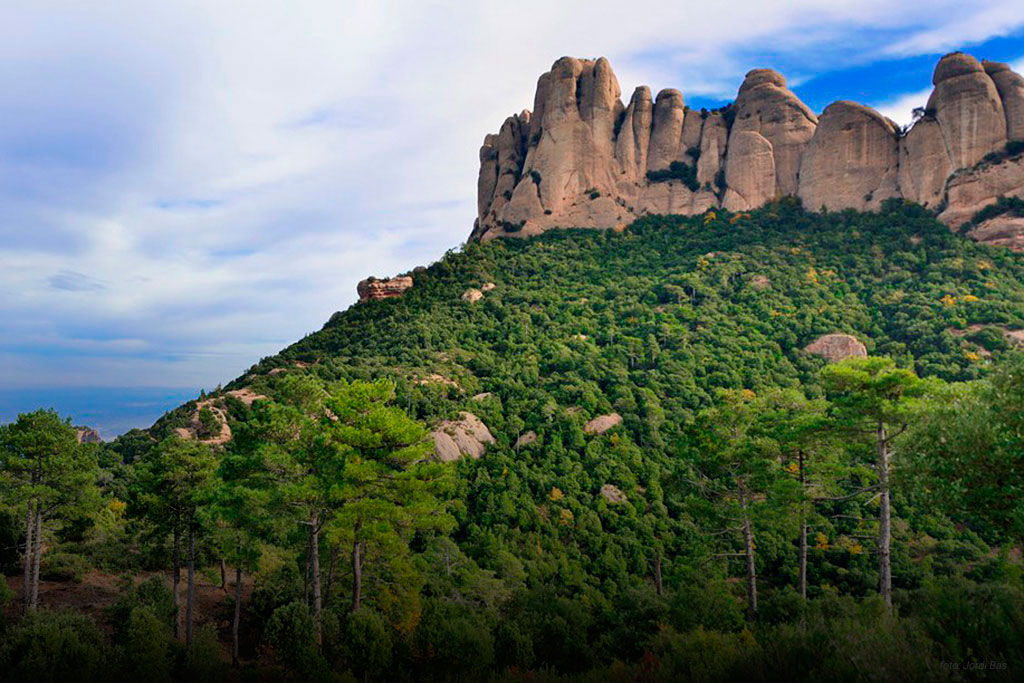 PREVINCAT is a web server aiming at providing the required information to plan fuel and forest management actions to reduce the risk of large forest fires in Catalonia.

It is a project implemented by the Forest Science and Technology Centre of Catalonia (CTFC), under request from the “Direcció General d´Ecosistemes Forestals i Gestió del Medi del Departament d'Agricultura, Ramaderia, Pesca i Alimentació” of the Catalan government, and the collaboration of the GRAF firefighters from the “Departament d´Interior de la Generalitat de Catalunya”.

What is the usefulness of PREVINCAT?

The information currently uploaded in PREVINCAT, specifically on Module 1: Vegetation cartographic server (forest landscape and fuel models), and Module 2: Meteorological scenarios, will allow to run fire simulations across any forest landscape in Catalonia, using a wide arrange of simulation Tools (FARSITE, FlamMap, WilfireAnalyst, etc.). Even more, it also offers information on those areas across Catalunya more susceptible to generate active canopy fires, due to their biomass accumulation, structural arrangement and underlying fuel model.

Module 3 allows to identify were fuel management actions should be prioritized, according to various decision criteria, among them the prevention of large fires, provide additional support to extinction measures, and increase protection on valuable landscape resources. Using a DSS based on multi-criteria decision analysis, that combines existing information and expert judgement, the system allocates management priority areas across the territory.

Which information can be found at PREVINCAT?

PREVINCAT, through Modules 1 and 2, compiles maps on all topographic and biophysical variables across Catalonia, plus associated climatic scenarios required to run fire simulations. The information provided by PREVINCAT is compiled by ZHR (Zones with Homogeneous Fire Regimes), allowing to define and compile both historic weather information on extreme fire weather and on their most representative fires. A ZHR encloses a part of the territory with the required homogeneity in terms of orography, vegetation, and local and general wind regime, to recurrently generate similar types of fires (Castellnou et al., 2009; Piqué et al., 2011a).

Module 3: Identification and planning of management priority areas for fire prevention and/or protection of high value elements, among others. A participatory process is being implemented, with a selected group of experts and stakeholders, in order to define the criteria, rules and weights, that will end up on a consensual agreement on the final results.

In order to generate the information and landscape maps, that can be found and downloaded from PREVINCAT, we compiled spatially explicit data on topography and vegetation characteristics. From the initial data, different variables related to potential fire behavior were estimated.

To generate the cartography on vegetation (Module 1) we combine existing information on vegetation composition (MCSC-4, 2009; Vericat et al., 2010; Piqué et al., 2011b), a digital terrain model and vegetation variables defining vegetation structure were obtained from LiDAR related data (mapes de variables biofísiques, CREAF (2016)).
When defining the meteorological scenarios (Module 2) a total number of 15 regions were identified for all Catalonia, with at least one reference meteorological station within the regions limits. Those stations having at least 20 years of recorded data. The methodology applied to define days of high risk of fire was the same as the one used by the fire prevention service (SPIF). Such methodology aims at identifying days with a combination of meteorological variables values (high temperatures, low relative humidity and high wind speeds, based on percentile assessments) that facilitates the development of a large forest fires.

Based on the initial data different variables related to fire behaviour were estimated, such as: bush coverage, branch insertion height and canopy bulk density. These new variables have being estimated through published statistical models (Coll et al., 2011; Ruiz-Peinado et al., 2011 and 2012) and new allometric relations developed from the 4rd National Forest Inventory. Additionally, fuel models (Scott & Burgan 2005) were defined for the whole Catalonia by combining initial and derived data, taking also into account specific adjustments for those areas affected by fires after 2009.
From the meteorological data, recorded on each reference station, different days were risky conditions were maintained at least during 4 hours were selected. These selected days were grouped according to well-known synoptic conditions (South entrance, ponentada, etc.) and their occurrence probability estimated. For most of the 15 regions data on meteorological scenarios leading to historic fires was also recorded (e.g. Bages 1998, la Jonquera l 2012 etc.). 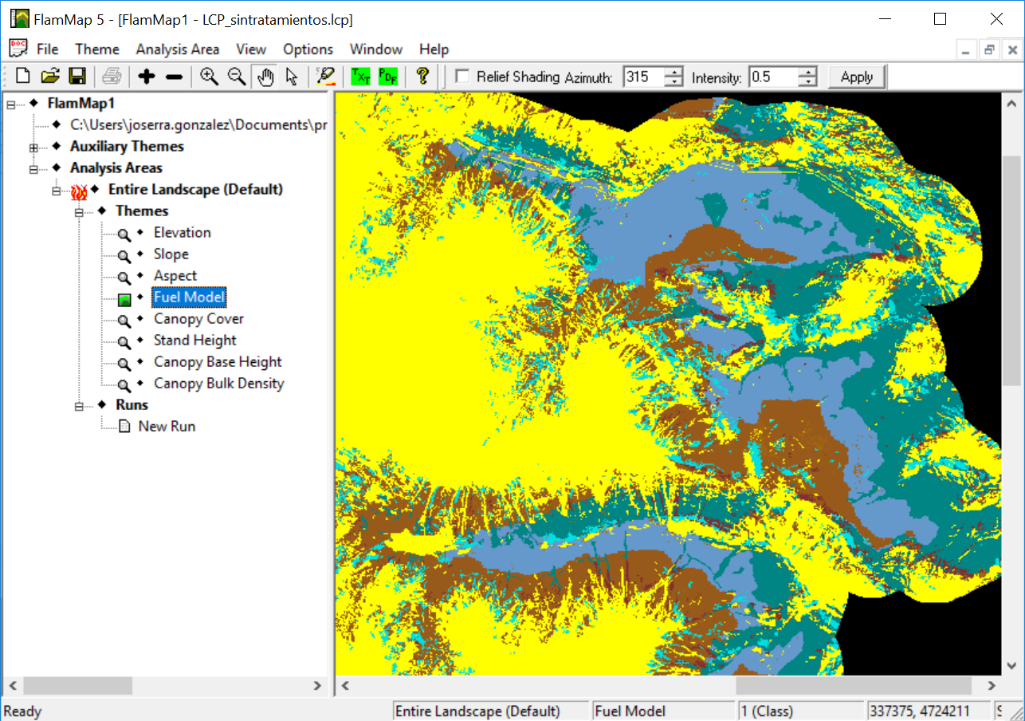 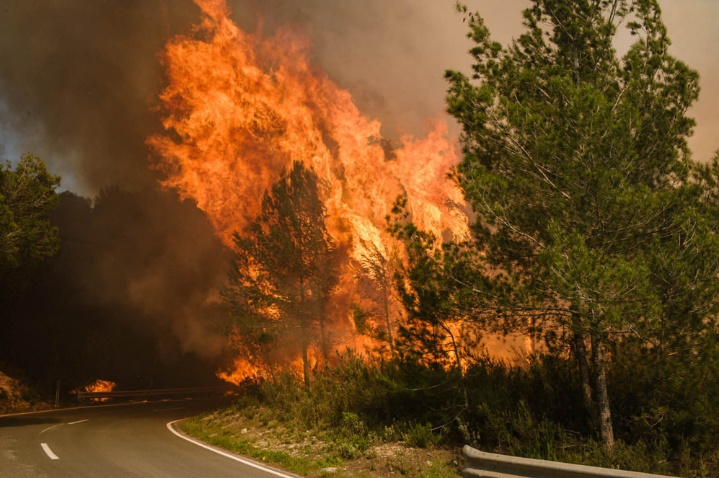 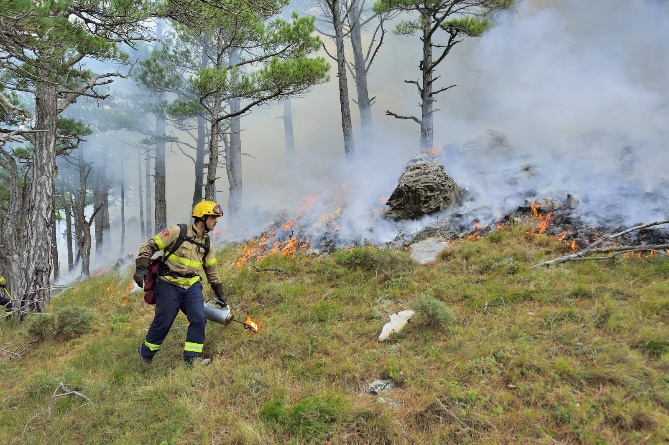 Module 1: Vegetation cartography server
The information offered by PREVINCAT to generate a. LCP file for any zone with homogeneous fire regime (ZHR) is:

A composite landscape file (.LCP) consists on a multi-layer raster, containing descriptive information about the terrain and fuels, that can be used as a base to run spatial explicit fire simulation. These type of files are the required input for simulators like FARSITE, FlamMap, WildfireAnalyst, etc. 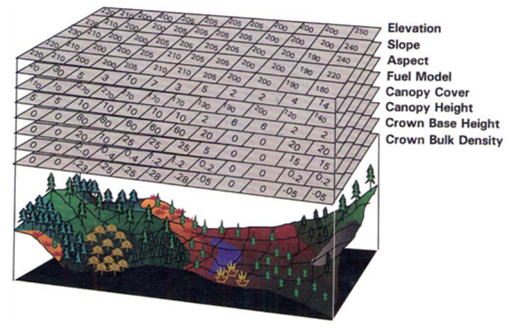 Data description
All the cartography can be downloaded in ASCII format (layers with a 20x20m resolution and UTM 31N ETRS89 Datum coordinate system)
Additionally, for each ZHR, meteorological information on reference fires and on those conditions identified from stations data as potential precursors of large fires was recorded and uploaded on PREVINCAT. These meteorological files (.WTR) and wind files (.WND) are ready on the server to be used to run FARSITE and FlamMap simulations.